Key feature: when splicing the same T2MI stream with the same local content in few points of SFN-segment, the output T2MI stream is fully usable in a DVB-T2 SFN network, i.e. splicing does not violate the integrity of the SFN-segment at different points of this segment.

Software works under Microsoft Windows on low-power x86/x64 processors, operates as a service/daemon, and is 24/7/365/N oriented.

Splicing in T2-networks is rather complicated task because of additional data encapsulation into T2MI-level. The task is even more complicated in single-frequency synchronous SFN T2-networks, where bit-by-bit identity of data transmitted from different transmitters is required.

At logical layer the software decapsulates MPTS-stream out of T2MI. Then it performs splicing of commercials into required services without transcoding. Then resulting MPTSes are encapsulated back into T2MI stream with preserving original T2MI structure: 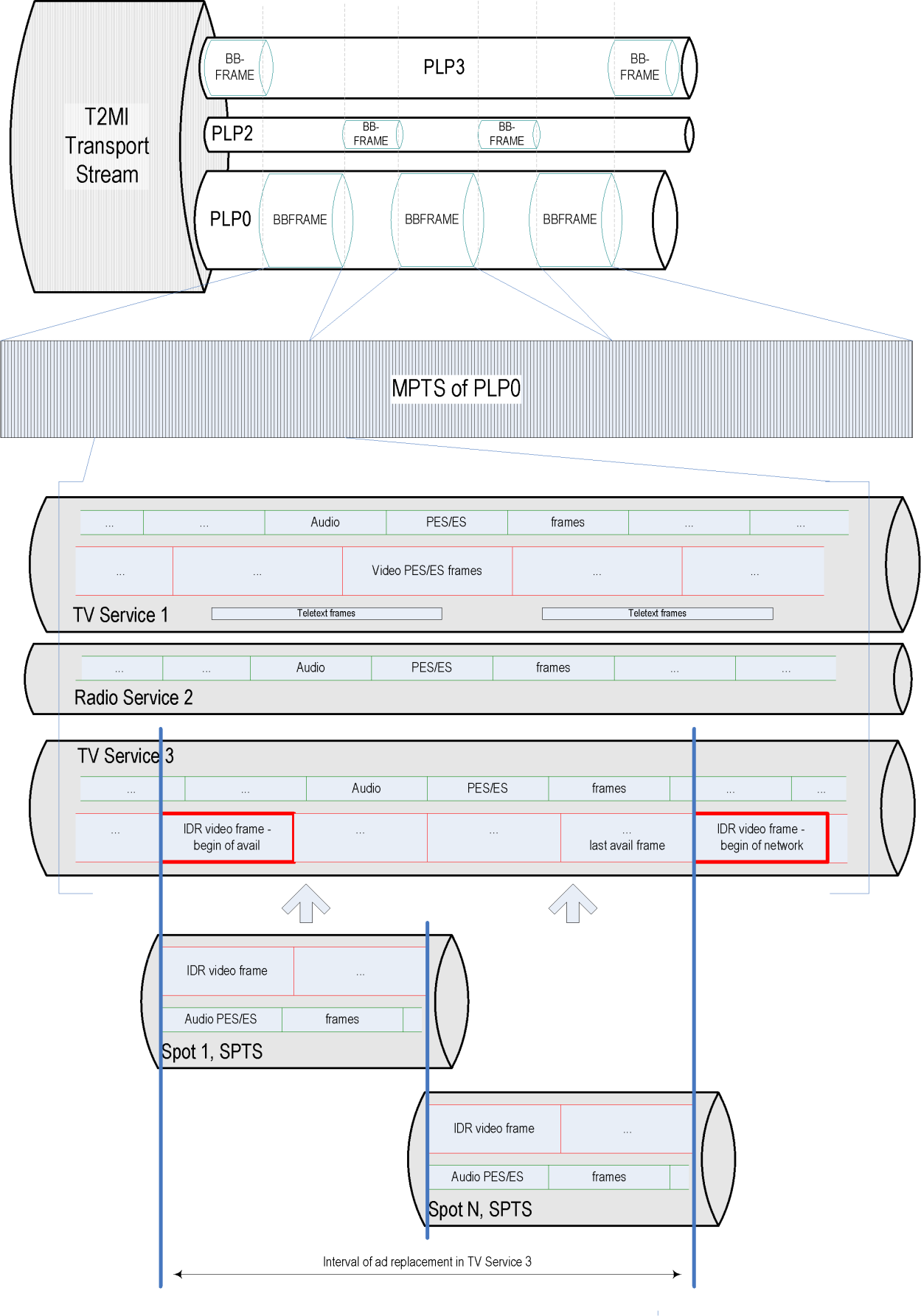 On physical level the software does not decapsulates T2MI-stream. In real, at the physical layer, the software does not split the T2MI stream into components, but instead, using a unique algorithm, calculates the position of the transport packets of service being spliced directly in the T2MI stream, and, when inserting local ad (file) content into that service or when inserting a live stream, it performs the replacement of transport packets directly in the T2MI stream, in the “inplace” mode. Using this mechanism, the signal delay by the device does not exceed 250 ms, which is a unique characteristic and allows several devices to work in one synchronous segment of SFN.

Below is an illustration of the described splicing algorithm for T2MI streams at the physical layer, where BB-frame is the data of various PLPs.

The figure shows the technological process-algorithm for replacing content in the service "TV Service 3" from PLP0 of the T2MI stream.

Outside of replaced ad blocks, the T2MI signal passes through the splicer without changes, only the search for SCTE-35 cues and possible insertion points (IDR frames) is performed. At the T2-MI level, BB-frames that pass through unchanged are indicated in gray, as well as transport packets at the MPTS level. When replacing ad content, the splicer replaces the packets of a specific program in MPTS at the transport layer with transport packets from spot files, adjusting the PCR, taking into account the requirements of the Transport Stream Decoder Model (T-STD, according to ISO / IEC 13818-1), as well as Video Buffer Control (VBV) and Hypothetical Reference Decoder (HRD, according to ISO/IEC 14496-10) models.

In the figure, transport packets being replaced in the video stream (Video PID) are marked in red and in the audio stream (Audio PID) - in green. The rest of the streams of the replaced program, as well as other programs in this MPTS, remain unchanged. Also, in this case, the data is reencapsulated to the T2MI level, according to DVB Document A136, the “recalculated” BB-frames are marked in yellow in the figure.